To celebrate the paperback release of The Queen of Hearts, Kimmery Martin chatted all things Open Book!  If you love Grey’s Anatomy then you will love this book as it definitely has all the ingredients of Seattle Grace 🙂 She shares her bookish lipstick shade (it’s fabulous), current reads and her AH-mazing writing space!  Read below to learn more about this fantastic book and wonderful author ❤ 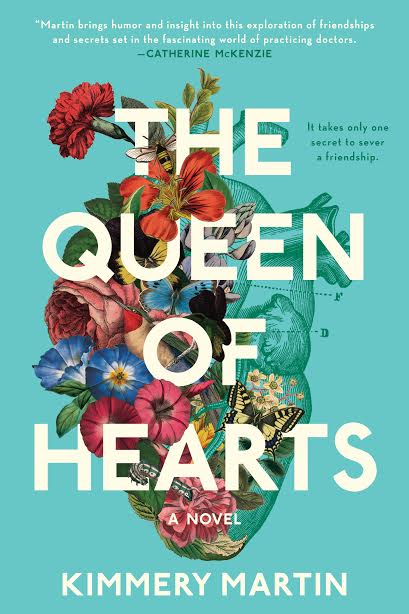 One of Real Simple‘s “Best Books of 2018”
Named a Most Anticipated Book of 2018 by Southern Living, Elite Daily, and Writer’s Digest

A powerful debut novel, praised by The New York Times, Bustle, and Hypable, that pulses with humor and empathy as it explores the heart’s capacity for forgiveness…

Zadie Anson and Emma Colley have been best friends since their early twenties, when they first began navigating serious romantic relationships amid the intensity of medical school. Now they’re happily married wives and mothers with successful careers–Zadie as a pediatric cardiologist and Emma as a trauma surgeon. Their lives in Charlotte, North Carolina, are chaotic but fulfilling, until the return of a former colleague unearths a secret one of them has been harboring for years.

As chief resident, Nick Xenokostas was the center of Zadie’s life–both professionally and personally–throughout a tragic chain of events during her third year of medical school that she has long since put behind her. Nick’s unexpected reappearance at a time of new professional crisis shocks both women into a deeper look at the difficult choices they made at the beginning of their careers. As it becomes evident that Emma must have known more than she revealed about circumstances that nearly derailed both their lives, Zadie starts to question everything she thought she knew about her closest friend.

Leonardo Da Vinci, Cleopatra, and Hunter S. Thompson. That should make for a pretty lively discussion.

The Glitch, by Elisabeth Cohen. It’s about a type-A female Silicon valley executive whose carefully curated existence is upended when a younger version of herself suddenly appears. It’s snarky and clever—my favorite kind of read.

My cell phone (for camera purposes, and also because I am always lost), stylish but comfortable shoes for walking—I like Donald Pliner— and my laptop, so I can write and post for my travel series. (Sample here from a recent trip to Costa Rica). I’d like to visit Asia next; probably Hong Kong.

I’m going to be honest: my babysitter.

Anything by Bill Bryson, especially A Walk in the Woods. Also wish I’d written Eloise by Kay Thompson.

Not while I write. But I’m fond of a genre called Ganstagrass— it’s a mixture of bluegrass and rap. I like mixing things up.

I commandeered the playroom, because it’s the best room in our house. I added a desk, a gorgeous light fixture, and gold wallpaper and now I practically live in there.

I’m an evangelist for a science writer named Michio Kaku—I’ve given his books to lots of people.

Eleanor Oliphant Is Completely Fine, by Gail Honeyman. But it’s a crapshoot when you really love a book specifically because you love the writing; a lot of the language and interior monologue gets lost in translation to film. So maybe it’s better to go with something high-concept and action-y. I thought The Salt Line by Holly Goddard Jones was excellent; it’s about a dystopian future where the United States has been ravaged by killer ticks (and no, they’re not giant, so it’s not like a bad remake of Starship Troopers or anything.) It was super-suspenseful. I also just read a thriller that’s coming out in early 2019 that I’m certain will be a movie someday: My Lovely Wife by Samantha Downing. It’s about a murderous suburban couple and it’s chilling.

Possibly it would be Take Me Home Country Roads. I grew up in the rural Kentucky mountains and even though I’m all urbanized and decadent now, some part of my soul eternally yearns for the peace and beauty and privacy of my childhood home.

Noooooo. I have plenty of drama in my own life. Someone even approached me about being in a reality show about southern women doctors and I didn’t pursue it for obvious reasons. I mean, no one wants to watch a show where everyone is functional, am I right?

Margaret Atwood has a sequel coming out in 2019 to The Handmaid’s Tale and I can’t wait to read it.