Happiest of St. Paddy’s Day to you!  Much luck and love, all year long!  What better than an Irish love story to make this day complete ❤  Grace After Henry by Eithne Shortall, is a heartbreaking love story that has echos of JoJo Moyes sprinkled throughout.  Eithne is my latest Open Book and she gives some great advice, also loves Busy Phillips Instagram and has a fabulous TBR pile!  Plus Eithne other novel, Love in Row 27, has been optioned for a TV show, love a good page to screen 😉 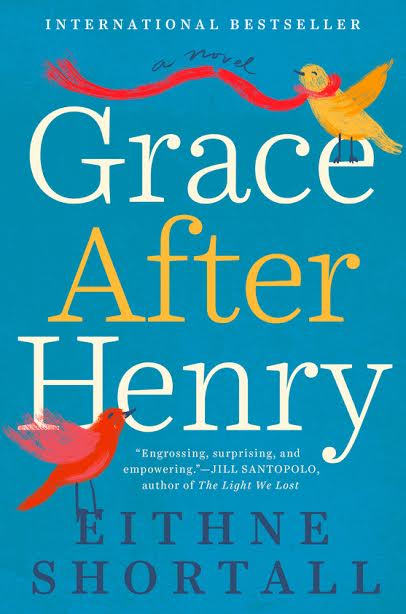 A quirky love story set in Dublin that’s perfect for fans of PS, I Love You and Jojo Moyes, Grace After Henry is a funny, heartfelt debut novel about one woman learning what it means to move on and to let go.

When the love of her life, Henry, is killed in a freak biking accident, Grace feels like she’s lost her own shadow. In his absence, she must put her world back together: she moves into the Dublin dream house they bought together, she returns to work as a chef, she watches TV with her nosy elderly neighbor. But, through it all, she’s ever aware of the growing Henry-shaped hole in her life.

Until his long-lost twin brother knocks on her door.

Newly arrived in Ireland on his own search for answers, Andy is Henry, and yet not quite. Soon Grace isn’t sure if she’s learning to let go or becoming desperate to hold on. Grace After Henry is a funny, tender, and bittersweet story about love, loss, and second chances.

1. What three celebrities/authors/figures- living or dead, would
you want to have a book club with?

Nora Ephron, Margaret Atwood and someone with an excellent wine
cellar.

Do you mean books? If so, I’m currently making a start on PD James’s
back catalogue. I spent last year devouring everything Liane Moriarty
wrote, and I think 2019 will be the year of PD James.
If you mean TV, I don’t watch a lot of TV but I am currently wrapped
up in Sex Education on Netflix. I love anything set in the world of teen
angst, although I do wish the show would make up its mind about
where, if not when, it is set.

4. What 3 things to you pack in your bag for your dream
vacation?  Where is it?

1. Books, at least three.
2. SPF, I worshipped the sun in my late teens/early twenties and
am now trying to make amends.
3. A swimsuit that can withstand waves.
If it’s a sun holiday – which my packing list suggests that it is – then it
has to be the Greek Islands.

5. Sunday NYT or US Weekly?

Even though I’m based in Ireland, I do have a New York Times
subscription. So it’s a no-brainer.
6. Last person you sent a text message to?

My boyfriend. Asking him to pick up a Cornetto Classico ice-cream on
his way home. He obliged.

7. Book you read that you wished you wrote?

There are so many. But the last one was Liane Moriarty’s Big Little
Lies.

8. Do you have a teacher who encouraged you to become a
writer?

Not specifically, but I had amazing primary school teachers who
encouraged my confidence and generally taught me to believe in
myself and my abilities. To that end, I would namecheck Maire
McHugh.

9. Do you listen to music while you write? If so, who?

I almost always write in complete silence. I might listen to music
before writing, to put me in the mood. With Grace After Henry, I never
did that. I did, however, lie on the floor of my writing room and try to
imagine how it would feel to have the love of my life die. When I found
myself on the verge of tears, I knew I was ready to write.

It has changed. I wrote most of Grace After Henry in a small bungalow
in the middle of nowhere in the west of Ireland. There were always
multiple birds hopping around outside my window, but some days that
was all the living interaction I had. I went there to try to imagine my
way into Grace’s head – to make myself feel what it would be to be all
alone. My next book, however, was written in a writing room at my
home in Dublin. That room is wall-to-wall books, with a view from my
desk into the back garden.
11. Coffee or tea?

Tea, and lots of it.

12. Do you have a favorite book that you gift?

I have bought several copies of several books as gifts. Among them
are Donna Tartt’s The Secret History, Tana French’s The Secret
Place, John Banville’s Book of Evidence and Marian Keyes’ Rachel’s
Holiday.

13. Book that you wished they would make a movie out of?

I’m very much looking forward to seeing how Sally Rooney’s Normal
People is adapted for the small screen.

14. If you could have one song as the theme song of your life
what would it be and why?

This is too hard. I can’t pick one. Although if Joni Mitchell’s Blue album
was just played on a loop, I’d be pretty happy with that.

A little piece of my grandmother has made it into all my book thus far.
She’s a no-nonsense woman who is very funny in her refusal to
indulge anyone about anything. She was the inspiration for Grace’s
neighbor Betty in Grace After Henry.

For the little TV I do watch, reality shows don’t make the cut.

18. If you could name just one lipstick after a book, what would
you call it and what shade would it be?

Well I’m always in search of a good nude, so that’s the shade. And
then I guess I’d call it…. Naked Lunch?

I can’t actually look my TBR pile in the eye or I’ll start to
hyperventilate. But as I recall, Jo Spain’s Dirty Little Secrets and
Taylor Jenkins Reid’s Daisy Jones and the Six are sitting at the top of it.

“You’ll be dead soon.” I find it very uplifting. Don’t waste your time
worrying, you never know when you’re going to run out of it.